What You Need To Know About Deer Ticks in Canada 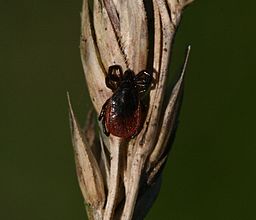 The Public Health Agency of Canada confirms that the number of infected black-legged deer ticks in Canada are increasing and can potentially trigger Lyme Disease in less than 24 hours.  With an estimated 40 species of deer ticks in Canada, it is important that home gardeners and farmers alike get the facts about deer ticks. Here's what you need to know:

2) Deer ticks do not die in the winter; and risk of Lyme Disease is year-round. Be sure to perform a thorough tick-check after hiking, walking or gardening as deer ticks crawl from the ground up.

3) Symptoms of Lyme Disease are often mistaken for the flu and can be mis-diagnosed by a doctor.

4) The Black-legged tick is the second most common Borrelia-carrying tick in Canada.

5) American dog ticks are common in Saskatchewan and can transmit many diseases including Spotted fever. (They usually don't carry Lyme Disease.) The Brown Dock Tick also carries Spotted fever, although not necessarily in humans.

6) If you find a deer tick attached to your skin, remove it carefully with a tick removal tool. Do not burn the skin area; and make sure you get the head and body out thoroughly to avoid possible transmission of Lyme Disease. After the tick has been removed, clean the skin and consider scheduling an appointment with your doctor.

7) Lyme Disease can be prevented and treated.

8) Deer ticks attach to warm-blooded hosts such as deer and humans.

10) Not all deer carry ticks and not all ticks carry Lyme Disease.