Ticks in the Cretaceous Period

Frozen in place inside a piece of 100-million-year-old amber, the hard tick grasps the fine barbs that comprise a single feather, which the study authors from the Spanish Geological Survey (IGME) say belonged to a theropod, a large family of dinosaurs that included Tyrannosaurus rex and velociraptors. These days, ticks are known to feast on the blood of modern birds — the descendants of feathered theropods — but until now, scientists didn’t know whether ticks had lived in the age of the dinosaurs, let alone whether they fed on them. 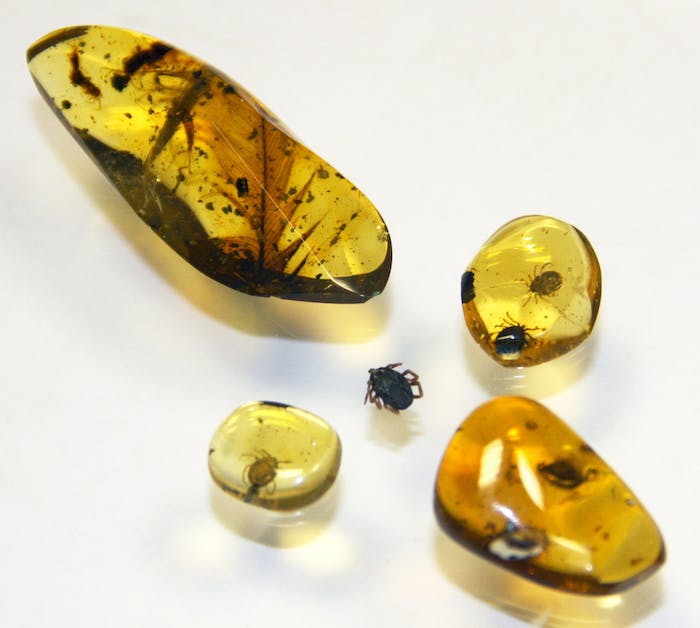 The amber-encased specimen described in the paper is the first evidence that parasites actually had the courage to chow down on their dinosaur overlords.

“Ticks are infamous blood-sucking, parasitic organisms, having a tremendous impact on the health of humans, livestock, pets, and even wildlife, but until now clear evidence of their role in deep time has been lacking,” said the study’s lead author Enrique Peñalver Ph.D., in a statement.

The pieces of amber encasing the ticks were first collected in Myanmar, which is known for its abundant deposits of the fossilized tree resin. The priceless pieces had exchanged hands among private collectors before they wound up, by donation, at the American Museum of Natural History in New York. There, the scientists analyzed the tick’s position in relation to the feather and pieced together its story.

The tick was most likely grasping its dinosaur host’s feather when the feather detached, and it continued holding on as it fell to the ground, where it was suddenly drowned by tree resin, the researchers write.

“The tick is entangled with the feather’s barb in virtually the same orientation, indicating that both contacted the resin together after separation from the feathered host,” they note in the paper.

Unlike the mosquito encased in amber in Jurassic Park, the scientists won’t be able to extract DNA from this ancient tick or from the blood meal inside it. DNA, the researchers point out, actually breaks down very quickly and can rarely be recovered from fossils.

Nevertheless, the structural makeup of the feather that the tick grasps onto confirmed that ticks fed on feathered theropods, “showing that the parasitic relationship that today binds ticks to birds was already established among early representatives of both lineages and has persisted for at least 99 million years,” the researchers write.

In the study, they also note the discovery of two other ticks of a different species encased in similarly old amber, further supporting the idea that more of these tiny bugs dared to prey on animals hundreds of times their size. This now-extinct species is known as Deinocroton draculi, or Dracula’s terrible tick, and is thought to have also feasted on feathered dinosaur blood, judging by remnants of skin beetles — bugs that commonly feed on feathered animals — next to them in the amber.

While it’s great for the ticks that their valiant history is finally being told, the species hardly need congratulating on their triumph over their small size. Most dinosaurs didn’t make it past the great extinction that ended the Cretaceous period 66 millions years ago, but ticks are very much still around today, continuing, as they have for millennia, to suck blood from victims much larger than they are.