Elk Hoof Disease has affected Western U.S. livestock farmers in Oregon and Washington State in recent decades. Although there haven't been reported cases of Elk Hoof Disease in Canada, cases are on the rise and could potentially show in cities close to the border. Here is what we know about the animal illness on elk hooves:

Elk Hoof Disease, also known as Treponeme associated hoof disease, is a bacterial disease known to cause abnormalities on the hooves of elk and other farm animals creating broken, missing or deformed foot pads. Digital dermatitis has not been found to harm humans; but it has plagued the livestock industry for decades. Currently, there isn't a vaccine to treat the crippling hoof disease and researchers have yet to find other proven methods for curing the deformities. 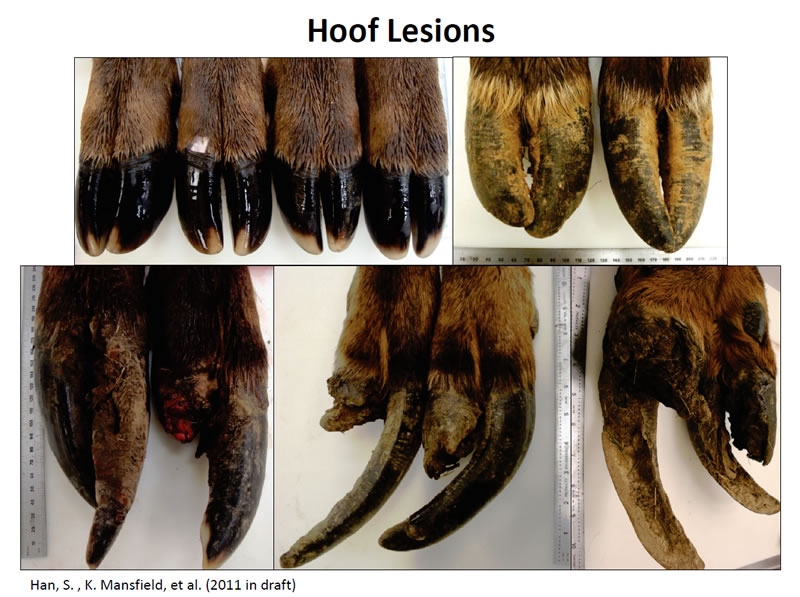 Photo from Washington Department of Fish and Wildlife

The hoof disease has affected sheep, goats and cattle since 1974. In the United States, the disease is the leading cause of lameness in dairy cows, occurring in 70 percent of the nation's dairies and is responsible for 50 percent of lameness in cows.  As far as we know, the disease does not affect the livestock animal's meat or organs.

Biologists believe that the bacteria likely persists in moist soil where infected farm animals roam. Herbicides and pesticides were once believed to cause the elk disease; but there is no scientific evidence to suggest this is the reason.

However, gardeners and farmers are advised to keep elk away from their property with elk fencing. Biologists remind homeowners that once the bacteria appears on land, it is difficult to set it free from the soil.