April 4, 2017: An Ontario researcher who studies Lyme disease in Canada says there's increasing evidence that it is prevalent in northwestern Ontario — particularly in the far west, around Kenora.

John Scott, a research scientist with Lyme Ontario, said a peer-reviewed study he authored, recently published in the Journal of Bacteriology and Parasitology, found that eight different species of tick known to carry Lyme disease were found within a 50 kilometre radius of Kenora.

Five of those types of ticks will bite humans, he added.

"I had no idea that we would find this," he said of the variety of ticks researchers found, as well as the infection rate. "I don't think others suspected the same thing at all."

As for the infection rate, Scott said 94 ticks, consisting only of species known to carry Borrelia burgdorferi — the bacteria that causes lyme disease — were collected in the Kenora area and tested. 39 of them, or 41 per cent, tested positive.

Some common names for the ticks Scott studied include the pale beaver tick, the groundhog tick and, of course, the black-legged, or deer tick. He said the small arachnids used in the study were taken from animals including mice, dogs, hares and humans.

The study omitted wood ticks, as they are not known to carry lyme disease, he said.

This research, looking at infection rates on the mainland around Kenora, is in addition to work Scott did previously that found unusually high rates of lyme disease-causing bacteria on Corkscrew Island on Lake Of the Woods, southwest of Kenora.

With above-freezing temperatures in the region, Scott said people need to be careful. 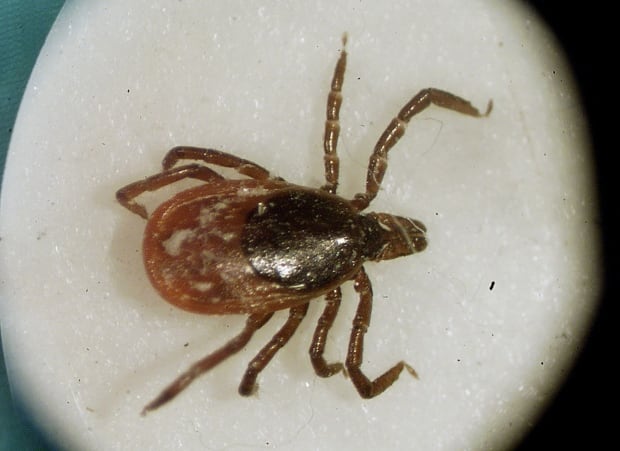 Symptoms of Lyme disease, which is spread through ticks, include fever, headache, fatigue and a bull's-eye rash. (Associated Press/Victoria Arocho)

"I think that they should be doing full-body tick checks if they're working out in the environment, particularly if they know there's a hotspot there," he said.

In the Thunder Bay area, entomologist Ken Deacon said the Lakehead hasn't seen infection rates anywhere close to those observed in the far west, but cautioned that if weather patterns change to more closely reflect those around Kenora, that lyme disease is one thing that could come with them.

"What happens in Kenora can happen in Thunder Bay," he said.

Deacon echoed Scott's recommendation that people be vigilant about tick checks — regardless of where in the northwest they are — as the creatures are active whenever temperatures rise above 4 C.